And lots of it!

Last weekend we went to a mud bog. 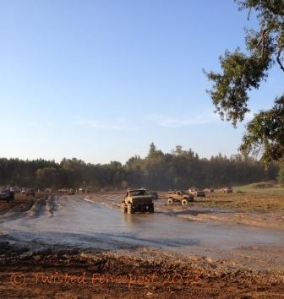 There were 3 seperate pits. One for ATV’s, one for the big trucks and one for the kids to play in.

You can see by the tell tale signs that this truck is supposed to be white. 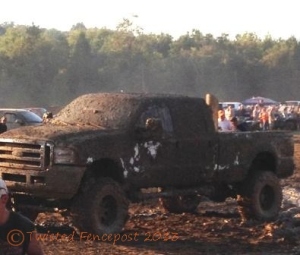 They came by the car loads. They came by the truck loads. There were thousands of people there. Early in the day we heard there was approximately 3,000 people in attendence. I would guess that number only grew as the day wore on due to a steady stream of vehicles moving in/out all throughout the day.

And at $10 per person, I’d say those people raked in some money that day.

We ran into several friends while there. I don’t know why that surprised me, we were only about 45 minutes from home.

The picture below is of a friend who was making steady progress through the muddy trenches until the Jeep finally bottomed out.

Early in the day the bog was easy to travel through. But as the day wore on the ruts became deeper and more difficult to maneuver.  One problem being that if you get caught in the wrong rut it just drives you further into the pit and deeper into the mud.

By the time we left the vehicle below was the only vehicle that could travel through any part of the bog without getting stuck.

It was also the only vehicle that could pull any other vehicle from their bottomed out, spun out, knee deep mud bog final resting place.

And of course there’s always the guy that succumbs to the pit and becomes one with the mud. 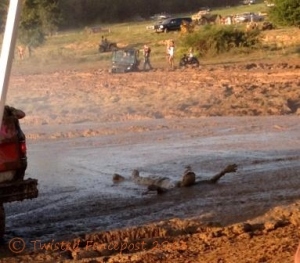 In case you’re wondering…..yes he’s doing the back stroke.

I wonder how many showers he had to take to wash away all that mud????

I have heard of mud bogs but had never witnessed one. And let me tell you it was all I expected and more. I told my husband it was a South Carolina redneck convention!

Have you ever been to a mud bog?

If so, did you participate?

I did not participate. It was my first mud bog experience and personally I like to check things out before I go jumping in.

Will I participate next time?

Maybe. It just depends on whether I get to drive or not!!!

Will I become one with the mud and do the mud pit backstroke?

Not on your life!

We did have fun watching and anticipating which 4×4 truck/Jeep/ATV/SUV…..would make it completely through without needing assistance from a chain/tow strap and an additional 4×4.

The only thing I did not like about the whole experience is that it seemed to be total chaos everywhere with big trucks, Jeeps, ATV’s, sidebysides, etc. in constant motion. I felt like I had to be in constant motion to make sure I did not get flattened. I finally backed myself up to a very large tree and enjoyed the show.

My husband and son are already discussing how they can come up with the money to prepare either “The Moose” (old Dodge Power Wagon) or the Bronco, both 4×4’s, for the next mud bog frenzy.

So, again, have you experienced a mud bog? I would love to know your thoughts about the whole total chaotic experience.

Yesterday I mentioned that we had been to a balloon event. I thought I would share with you some of the images my rabbit captured.

There were actually two in one day that we volunteered to help with.

The first was at a local church for a spring festival.

The second was way out in the country at a birthday celebration.

I love the reflection of the balloon on the water.

The farm was a really beautiful place. Below are other images I collected that day.

This is the original home that is now rented for parties and such.

I find old barns fascinating and found it hard to resist the urge to walk over and explore the buildings below. 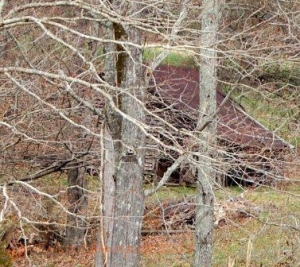 There was a small pond where I captured the above balloon reflection and this image of the small dock that led out over the water.

Such a peaceful image. I can imagine myself sitting there with my legs hanging over and my toes touching the water on a hot summer day.

Riding in a hot air balloon is very peaceful. It’s amazingly quiet up there floating around the sky.

I hope you enjoyed the images as much as I did capturing them.

A couple of months ago, my son came home telling me a friend had recently joined the wrestling team at school. And this friend was telling him that he should also join.

Knowing that wrestling practice had already begun, I told him to speak with the coach asking if he could still join.

If you’ve ever watched a wrestling match you understand where I’m coming from. If not, keep reading.

So he comes home one friday and says that the coach says it’s too late but for him he’ll make an exception, but….

He has to have a sports physical and his hair cut before monday.

Oh well, so much for hoping, right?

So I get on the phone and saturday morning we get the physical and the hair cut.

And speaking of physical…

Have you ever watched a wrestling match???

These kids really go at it hard.

Boo isn’t in the above picture, I’m only showing this one, because it is what most of my pictures come out looking like. It’s really hard to get “good” pics inside a gymnasium to start off with, and then they are constantly moving, making the pictures blur like this.

Here’s our mascot, The Wildcat.

Here’s Boo scoping out the competition. 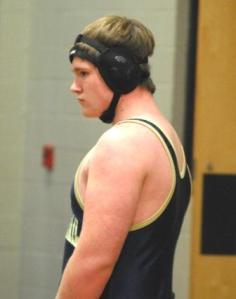 His skin really isn’t that red, it’s just hard to get good pics. The lighting is just not agreeable.

And then it may go into something like this….. 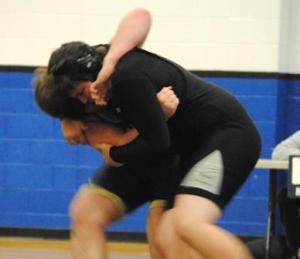 You have no idea how hard this is to watch.

The mama in me wants to run out there and grab that kid by his feet and drag him off my son and give him a good talking to or a slap on the wrist making it clear that this is in no way an acceptable way to be handling my child.

So I keep myself busy snapping pictures……..constantly.

Just as fast as the shutter will shuffle. Only pausing long enough to yell out an encouraging word.

Which has proven to be an asset.

Because Boo can go back and see his mistakes that I’ve captured via “The Rabbit”.

As if I don’t have enough stress already.

Once a week and sometimes twice, I go , I watch, I cheer, I snap, all the while on the verge of an anxiety attack.

But honestly, when I was his age, had they offered a girls wrestling team, I would so have been all up in that.

See, I was scrappy when I was young.

So I guess he comes by it honestly.

Going back to the yelling thing…..

A couple of weeks ago we spent most of a saturday at a wrestling tournament, if you follow me on Facebook you probably saw the updates about how Boo was doing in the tournament.

If someone I knew was wrestling, (Boo, for instance) I was yelling encouraging words. I happened to notice that a lady sitting across the walkway from me was watching (read : staring) at me. During the whole day sitting there, I never noticed her yelling for anyone. It made me wonder…..

Surely she was there for the same reason as I….to watch some teenager that she knows get tangled up with another teenager on a wrestling mat.

Why didn’t she yell encouraging words?

Did she think I was crazy for yelling?

Well, I really didn’t care if she thought I was crazy. I was gonna encourage my team in any way that I could.

It was an all day event that wouldn’t end until the last wrestlers had won their place in the state championship competitions. There were five matches on five mats going at all times until the very end.

People really get wound up tight during these matches. I watched one father who was seated about halfway up the bleachers when his son took his place on the mat. Taking a few steps at a time by the time the match was over the father was on the floor beside the mat.

We have to encourage our children to do the best they can. We have to be behind them with whatever they attempt.

Even if it means yelling from the sidelines.

No matter how much we worry they will get hurt.

And when they fail to win, we have to be there telling them they did a great job.

So if you happen to call me, and I can hardly speak , it’s because I’m hoarse from yelling encouraging words at my son and his team from the sidelines of a gymnasium wrestling mat.

A hoarse, worried mom of a wrestling teenager