This afternoon we had an interesting encounter with one of God’s creatures. The teens were walking along one of the trails they’ve made here on the farm and came across this injured barred owl.

If you’ve been around here long then you know that I love birds of all kinds and to see one injured breaks my heart.

The guys called me knowing that I would know who to call and that I would want to take pictures. So I looked up the number for our local birds of prey rescue center and gave them a call.

They instructed me on the best way to capture and transport him. Once captured I called them back and they began looking for a volunteer to meet me and transport the owl on to the Carolina Raptor Center.

It looked as if something had recently attacked him. One of his wings was pretty damaged. But atleast now he has a better chance to survive than he would have if my country loving teens hadn’t been walking their trails and found him. Two of them went with me to deliver the owl to the volunteer. They weren’t having it any other way. 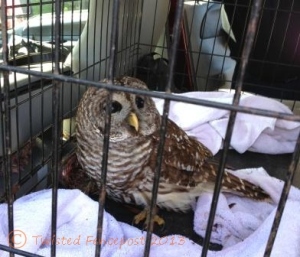 Two things that my parents taught me was to love God and nature. I am proud that I can see in those kids that I have successfully passed along those virtues.

The volunteer instructed me to call the center this evening and they will give me a patient # and with this I can track the owl’s progress through their website. If you would like to keep up with his progress, return here and I will post the web address and the patient # as soon as it is available.

And if you get a minute, say a little prayer for his recovery. Thank you! (SEE UPDATE BELOW)

UPDATE: I spoke with the rescue center late this evening and I do not have good news to report.

They said his wing looked as if he had gotten caught up in something and in the struggle to free himself it was damaged worse than we thought. They also said he was pretty skinny and it seemed he had damage to one of his eyes. They had to put him down. So sad! She also said that he probably would have starved had we not found him but it would have taken a week or so for him to starve to death. So even though they had to put him down, we are thankful that he is not still sitting on the forest floor suffering. I am sorry to have to report this, but I did promise an update.

The last Wheedle Word was….

Makes me think of trees, wildflowers, wild animals, babbling creeks and most of all peaceful.

Taking a walk through the woods has a way of clearing my mind, cleansing my spirit and just lifts my spirits.

I should take more leisurely walks through the woods.

So, how about a new Wheedle Word….

See ya next week!

The last Wheedle Word was the color…..

Red is the color of some fall foilage.

Red is the color of a beautiful spring tulip.

Red is the color summer blackberries before they ripen on the vine.

Red is the color of berries that feed the birds in winter.

While red is not my favorite color for clothing or decor it does add beautiful accents, I love it much more outside in nature.

There’s a new Wheedle Word for you….

Now, what are you thinking?