Yeah I’m the long lost blogger. I am trying to get back to posting at Twisted Fencepost. We stay busy here on the farm. Anyone who lives on a farm knows that there is always something that needs tending to. Whether is needs fixing or building, there’s always something going on here. With working a full-time job and 2 part-time jobs and spending all my free time tending to what is needed here there’s not much time anything else. Including doing the things I love, which is gardening, posting here at Twisted Fencepost and visiting all of you.

This year I built a new keyhole garden. I wanted to share it with you.

I still have the little one I told you about last year. We’ll call it my experimental keyhole garden. I know I told you I would post more pics as the season wore on. But honestly there wasn’t anything worth posting. You see that keyhole garden had too much shade for the cucumbers that I planted there. They did not do well. Not one cucumber.

So this year I am using it for an herb garden. 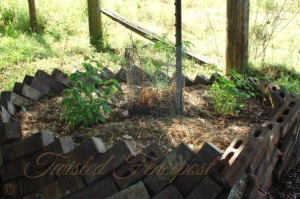 Using the wisdom of…

It is coming along nicely for the herbs I have planted…. basil, dill and parsley. I will probably add some rosemary in there too.

The new keyhole garden was built in an area that has full sun most of the day. And so far it is doing well. Whether it will produce cucumbers or not be the defining conclusion. I will keep you posted!

I promise that I will not abandon you and leave you wondering whether or not it produced cucumbers or not.

There are also green onions planted there in the corner. And so far they are doing well. They are almost ready to eat. I love eating them with hamburgers. I am feeling a cookout in my near future. 😉

PS….Stop in for a visit tomorrow. I will be sharing about little known products that I have discovered. And there will be a giveaway!!!

Hi there! Have you wondered where I’ve been? Since I returned to work I stay completely too busy. Too busy to write. Too busy to take pictures. Too busy to garden. Too busy for much of anything. Just enough time off to get the necessities completed.

But with this long weekend I took an extra day off. And during this extended time off work I was determined to work outside. If only for a little while each day. It is truly something I love to do so it doesn’t seem like work. I know some people abhor doing chores of that nature, but I do not. Yard work and gardening are very relaxing to me, not to mention rewarding. I know there are a few of you out there who agree.

Every year about this time I take on a new project. And it’s usually something I have mulled over and maybe studied throughout the winter.

I wanted to share with you this year’s spring project that I recently ran across on Pinterest. I know awhile back I warned against Pinterest and the whole copywright issue. I deleted my boards and swore off pinning another thing. But since then I have re-thought the whole Pinterest thing and have been happily pinning away. If you wonder what my interests are drop in on my boards and have a look around. There are so many good ideas out there!

So anyway, back to this sping’s project…..

Have you heard of a “Keyhole Garden”? I followed the links from Pinterest to this site. I was very intrigued after watching the videos. I mean, it makes perfect sense to me. 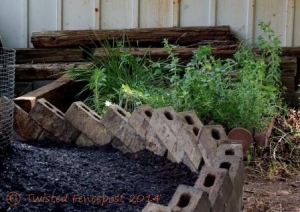 You see my issue is that I have a compost pile that has long been neglected simply because I don’t have time to turn it and water it and move it. So I eventually stopped putting kitchen scraps there. It made me sad each time I dumped peelings or scraps in the trash because I know how beneficial they could be to my garden. Keyhole gardening takes all the work out of composting and still leaves the benefits of the “black gold”.

This year I started with a small keyhole garden. It will eventually be an herb keyhole garden but because I am “very” late with my planting this year I will be using it for cucumber and maybe a companion plant or two.

At first I had two small herb beds. One of them has oregano and chives, both of which are perennials. So that bed is established. But the second herb bed did not have perennials. This is where I dug up and built the small keyhole garden with the help of The Captain and Boo.

And by the way, after the videos I “forced” them to watch, they also became intrigued.

Keyhole garden wall made from brick.

It is very inexpensive if you have things lying around that you could use, such as the post, the fencing and the brick that I used to build mine with. The only expense that I had was the garden soil. I know, there is dirt all around, but you must remember that I live in flat country and I didn’t just want to dig a hole and leave it for someone to fall into.

I’ll be sure to post images of it as the season advances and let you know how it is working for me. But I honestly don’t see how it could not be successful. At the end of the season I’ll let you know the pros and cons I may experience.

Have you heard of the “Keyhole Garden”?

And if so, have you created one?

How did it turn out for you?

Let us know in the comments.

My readers and I would love to know!!

P.S. Just in case you’re wondering my keyhole garden is about 3′ from center all the way around and I used about 100 bricks.

When spring approached this year my little herb patch took off.

The oregano and thyme wintered over very well. Which surprised me. I had expected to replant the herbs every year. As you can see I didn’t do much studying up on the subject of herb gardening. But that’s okay because I like to learn by trial and error.

The oregano has done so well that I have cut the stems back twice, tied them up with a piece of yarn and hung them to dry. 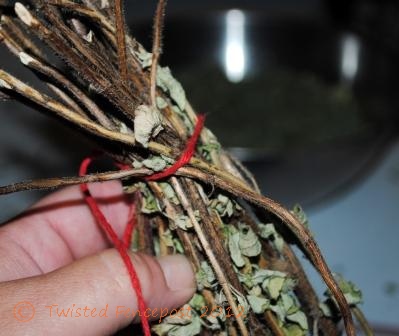 And then I waited until it dried and I had time to take it down.

I stripped it from its stem into a large bowl. It makes quite a mess and would probably be better done outside, but hind sight’s 20/20. 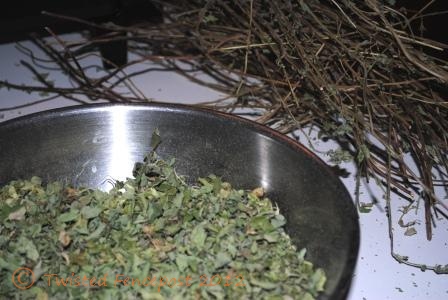 Then with my hands I scrunched and scrunched.

With those two harvests I think I have enough to last the year in this quart jar.

Gardening is not just about fresh out of the garden goodness. It’s about preserving what you can to last until the next harvest season.

Gardening is one of my favorite activities. It never ceases to amaze me that something can start from a small seed and produce enough to eat throughout the year.