As you know, The Captain and I play cards on Saturday nights with my in-laws.

We always play girls against the guys. Until this past Saturday night. 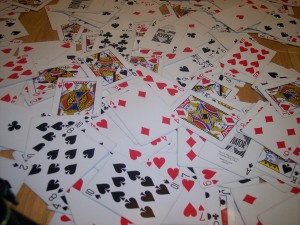 Us girls don’t have much luck in the way of cards. The “luck of the draw” is definitely on the side of the guys. We win a game occasionally.

So this past Saturday, the girls lost the first game, as usual.

My Mother-in-law decided, after a year of playing girls against guys, it was time to change partners.

She wrote names on six pieces of paper, folded them up and asked my SIL to draw three.

The outcome of the draw meant my BIL and my MIL switched places.

I would still like to see those little peices of paper.  You know, they mysteriously disappeared after the draw.

I still say it was a set up, planned and executed solely by my MIL to get herself on the winning team.

If you ask me, she got a little overly excited that she was now on the guys team.

We played the next game all the while accusing her of defecting and naming her a traitor.

Yes, this person. My MIL. The one with whom I shared hot doughnuts and cold milk.

Has defected to the other side. She left us girls high and dry. Didn’t even look back. She is now on the opposing team. Now the enemy.

From now on, I will refer to her as Arnold.

This game plays 4 hands and the team with the most points wins the 4 hand game.

Yes, my team lost this game also. I was beaten worse than ever before. At the end of the 3rd hand we were 6,000 points behind with no way to make up that kind of points in the last hand. Why we played the last hand is beyond me. But, play, we did.

You should have seen her when they won the game…

Dancing in her seat, whooting and doing the Cabbage Patch.

All competitiveness aside, I love my in-laws,

I don’t think I want to play cards anymore.