I thought I’d tell you a funny little story involving my Dad.

As some of you know, my Dad stayed at my house and I cared for him, in his last days.

He was still a little mobile, but he slept alot. And when I say slept. He slept hard. Most things wouldn’t wake him.

I was sitting in the kitchen when my son, then nine, came running in the room and informed me that Stretch, my miniature daschaund, has somebody’s teeth.

Now, hearing this, what would go through your mind?

Yeah, I was puzzled, and I went to investigate.

There they were, my Dad’s upper false teeth, laying in the middle of the floor.

Stretch was making circles around them. Trying to figure out what to do with them.

Funny? Yes, it was hilarious! 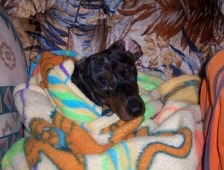 Finding my dog with my Dad’s teeth is not something that occurs, or even enters your mind, on a normal day. Right?

I scooped them up and went in Dad’s room and told him what I had found. He snickered and said , “He just wanted to try them on for size.”

Made me giggle. My Dad always looked at the funny side of things.

I, then, asked Dad if he had his lower plate. While watching him run his tongue around the inside of his mouth, I began to hear a noise coming from under the table beside his bed.

I couldn’t contain my laughter any longer.

I grabbed them up. Scolded the dog, as best I could, while laughing.

And took them to be cleaned.

My Mother, who was in the hospital at the time, got a big kick out of that one.

You see, she was always losing her teeth. We think, not one, but two sets were thrown away accidentally with a paper towel.

She commented on how he scolded her for losing her teeth all the time. But, as she stated, atleast she didn’t let the dog have them.

Yeah, she gave him a hard time over that one.

I still giggle when I think about it.