We bought a tractor several years ago. It wasn’t new. Who can afford new these days? It was used.
We use it for drilling holes for fence posts.
Moving huge round bales of hay. 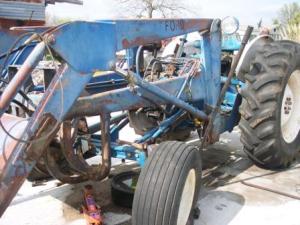 It has a bucket on the front.
We use that for lifting heavy items and moving them around the farm, smoothing out the rough spots in our driveway, filling it up with rocks and moving them out of the pasture. Since we grow more of them everytime it rains.
And we use it to lift The Captain up high enough to put a chain around a large limb of a large dead tree so he can hook the other end to the back of his honking big, 4 wheel drive, tough as nails, Ford truck and pull it down.

He hooked a chain to the tree and pulled it down with his honking big, 4 wheel drive, tough as nails, Ford truck.

I love that truck. Almost as much as I love The Captain. And I get to drive it any time I want to.
Seriously, we couldn’t just cut the tree down.
First, it was too close to my in-laws house. It had a crack big enough to stick your hand in, caused by a recent storm. And it was leaning toward their house. The main part of the tree would have missed the house, but the big limbs would have done some damage. So we chose to hook to it and pull it in the opposite direction.
The Captain had everything chained together with a large logging chain. Everyone was out of the way. We had to lock the horses out of the paddock and open the other gate to the paddock. Because that was the path the big honking, 4 wheel drive, Ford tough, truck was gonna go when he started pulling.

He slowly and cautiously pulled the chain taught. We could hear the tree start cracking. He stopped, got out of the honking big, Ford tough, truck. Checked all the connections to make sure everything was still ready for pulling. Got back in the truck, put it in 4 wheel high and pulled a little tighter until he could see that the tree was under some severe stress. We could hear it creaking and cracking and see it twisting. When it started coming down, he floored it. Not only to bring the tree down in one fell swoop, but also to make sure the Ford tough truck was out of the way. It came down with a larger than life thud and luckily the chain was long enough to keep the truck out of the path of destruction. Not only did that monster tree come down, but it uprooted.

That’s how bad of shape it was in.
At the time, I wasn’t wrapped up in the blogoshpere, so I didn’t take pictures.
Do you have a vivid imagination? Well, let me describe this tree. Imagine this…
It was a pecan tree.

The trunk had a diameter that if three adult people linked arms they could possibly reach around it, maybe four. It was about 50 feet tall.

Have you got your eyes closed, letting your imagination run wild?

Oh, of course not, you can’t close your eyes and read at the same time. What was I thinking?

Anyway, about 8 feet from the bottom it forked into two seperate limbs. Which were each very large. That tree was probably about 5oo years old.

Most years it produced buckets full of pecans.

It absolutely breaks my heart to have lost it and it has left a large hole where a beautiful tree once stood.

Here are some pics of it as the main trunk of the tree lies on the ground. We don’t have a chainsaw big enough to cut through it. 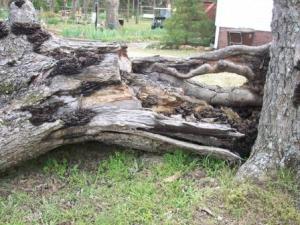 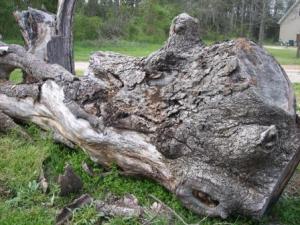 Second, if we had just cut it down, that would have been kinda boring and normal.

And nothing around here is normal!

AND, I wouldn’t have this story to tell you.

Once The Captain pulled it down, we noticed something white in the dirt at the bottom of the tree. We began digging and found some type of eggs about the size of a shooter marble. There, buried under all that fresh dirt and dead pecan tree wood was a snake nest with 34 eggs.

Wish I had taken pictures! Thank goodness we didn’t find the mama!

But, back to the tractor.
It has been a godsend for us. It handles the big jobs. And it also has a brush hog attachment. We have a field next to the highway that we mow twice a year with the brush hog. It’s too hard on the riding mower.

As I told you in my previous post, the tractor is down. It was making loud thrashing machine noises.
We got word from the shop that it has problems stemming from before we owned the thing.

The charges will be around $1,500.00 to repair. And that’s not complete. That’s just the shop charges. We still have to put it back together, gaskets and fluids and such.

One thing after another!

We’re gonna have spring hay coming soon and we gotta get the tractor back together to be able to move the hay around and cover it up.

It looks easy to roll those big round bales of hay. Have you ever tried it? It ain’t easy!
Surely, we are not alone. Surely, everyone else runs into, “What do we do now”, problems.

Please tell me we are not alone.

Stay tuned for the latest up to date info on the tractor…………..